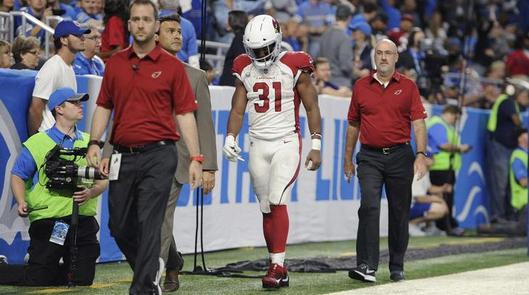 
So you finally landed the #1 overall pick in your fantasy draft and were feeling great about picking David Johnson as a stud RB you could hitch your wagon to.  You even had a juicy Week 1 matchup against a Lions defense that gave up the 8th-most fantasy points to opposing RB’s last season.  Then not only does DJ lay you a skimpy 2-burger in that matchup, his final play of the day goes from bad – a touchdown that could-have-been – to worse: Dislocated wrist, pending-surgery, and now a trip to IR which means the soonest you might see him back is Week 10.  As someone who got to experience this in two different leagues, let me echo your collective, “Ouch!”

In this article, I’m going to roundup and discuss the injuries from Week 1, give an educated guess on the impact of those injuries, and provide you with some recommendations for waiver wire pickups to hopefully salve those wounds.

Quarterbacks:  None
Surprisingly, particularly when you consider that two different offenses gave up at least 7 sacks in Week 1, all starting 32 starting QB’s remained entirely unscathed; the worst of it being Tom Savage (bruised ego) who was benched after only one half of football.

Quarterback: If you’re streaming this week, which I really only imagine you’re doing if you were counting on Andrew Luck, I present to you Sam Bradford (26% owned in Yahoo; 11% owned in ESPN leagues) who should continue to be a viable streamer this season.  However, and I realize this will sound nuts, Alex Smith at home against the Eagles would be my recommendation if you need a one-week fill.  As noted, Philly will be working out how to deal without Darby in the secondary and the Chiefs’ running game has shown to be vastly superior to what Washington put on the field.  I don’t believe the Eagles have anyone in their secondary who can handle Tyreek Hill.